This is one of the few conventions that I really get out there and sit in on panels. At most cons, it’s usually actors telling a quip or story and laughing with the panel host. It often seems rehearsed, repetitive and fake.

But this convention was different. The people speaking at the panels were passionate and knowledgeable. Especially in their areas of expertise. It all began last night.

The first panel I went to was hosted by Seth Shostak of SETI. He was memorable and amusing in how he explained his vision for how we look for extraterrestrial life.  I learned a lot about where mankind has gone wrong (lack of funding much?) and where we should be looking to the skies in the future.

The second panel I went to was earlier today. It was about emerging technology. What was neat about this panel was the fact that it seemed like four friends were on stage. There was a venture capitalist, a board memeber at Spacex/Tesla, a member of NASA, and Eugene “Rod” Roddenberry (son of some guy who created that sci-fi series that wasn’t Star Wars…) The discussions were about the technology advancements and speculation on where mankind will go in our search into the stars.

The last panel I attended was titled “Droids and Death Stars: The Science of Star Wars”. It involved a panel of a founding member of the 501st Legion from California, a lady who is a psychologist that deals with PTSD victims, and another female panelist from NASA who also loves Star Wars. The two ladies in the panel surprised me in many ways.  First- the comparison of PTSD of the Star Wars universe that is often overlooked.  (Chewie needs a hug after his loss in the last film…) And the other lady was being a realist about how the spacecrafts really wouldn’t work well.  Even though she is a fan, she also has a better scientific grasp on how things should work.

There was far too much knowledge shared in the past 24 hours for me to write about.  But now I have some topics that I can discuss with my other nerd friends when we return home.

I’m a bit of a geek & a bit of a nerd.  I’ve grown up knowing that’s who I am.  These past few weekends have been great.  Now we are hitting the road to return to our regular lives (just for a week, then more geeky times).  Here’s some quick highlights of my adventures diving deep into dorklandia: 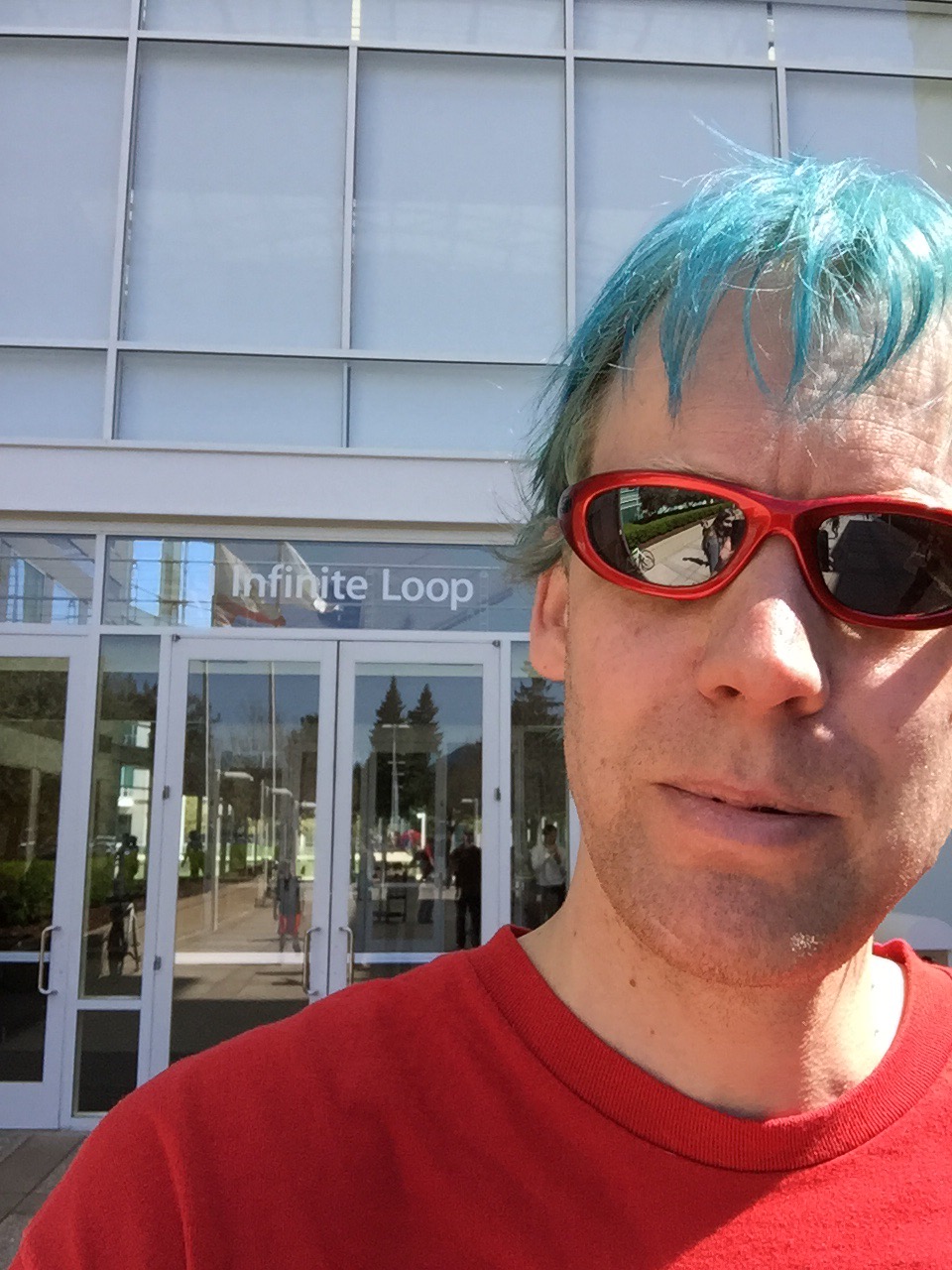 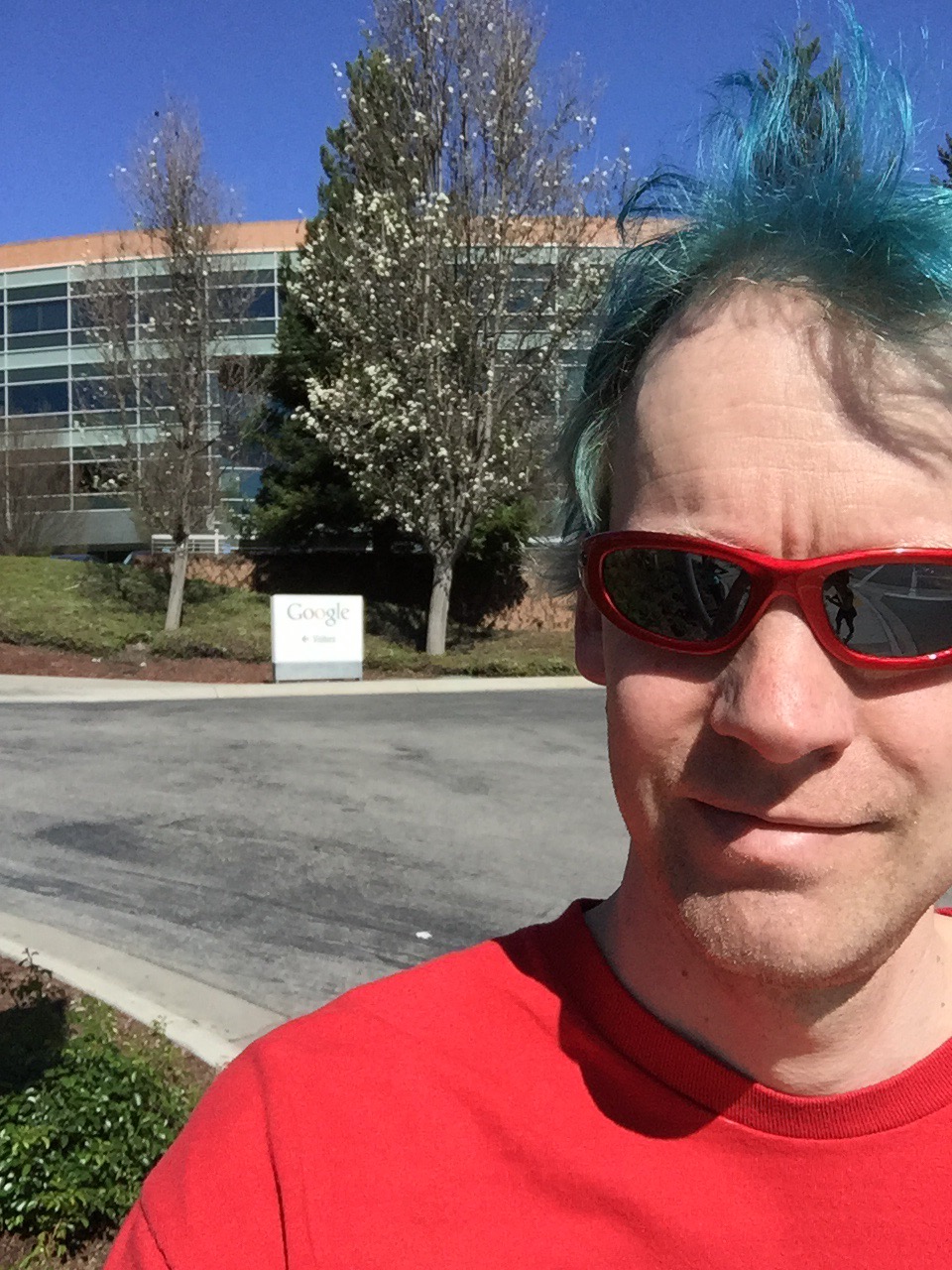 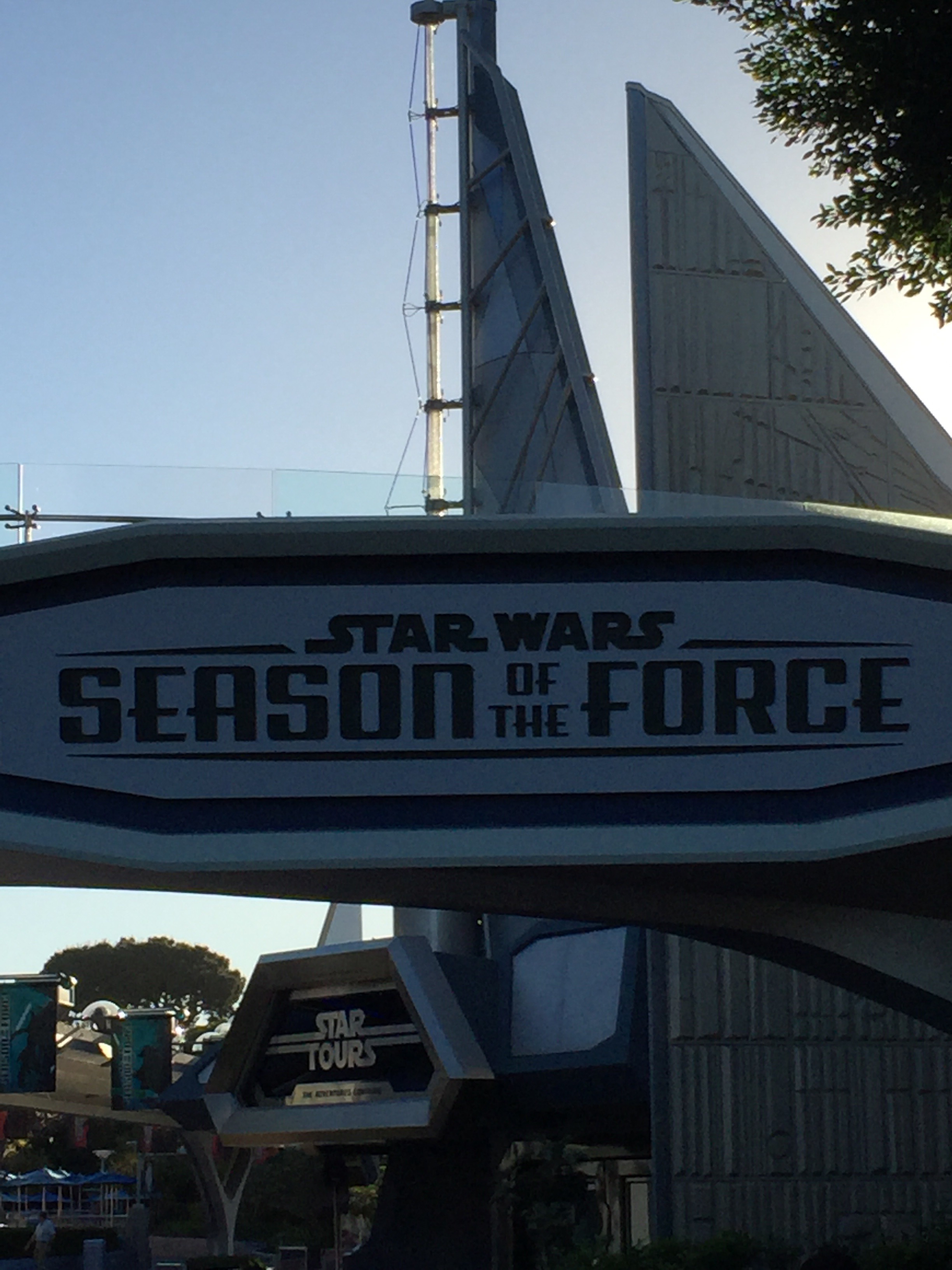 Disneyland’s Season of the Force.

A tall nerd hanging out at the Nerdist.

Best highlight of our trip- I met the king of nerds at the end of our visit.  The magic of the Internet finally had some physical locations and real people this trip.

I’m the first to admit, I don’t care much for sports.  You won’t catch me doing anything much more athletic than five pin bowling or maybe darts.  Sometimes walking is more than enough exercise for my week.  So, I don’t much care for watching sporting events. Today is a big day in the NFL.  It’s Super Bowl 50.  Parties and drinking and food and friends and commercials.  I’ll watch the commercials.  That’s the time companies really put up the money and make ads worth watching.

I’m a geek at heart, but I’ve noticed over the years that the line between jocks and nerds is closing.  Many people who watch football also watch superhero movies.  Baseball players love a good craft beer.  People who play videogames also enjoy hockey. Fun fact: In the early 80’s, Intellivision was the first video game company to secure the rights to major sports leagues such as NHL, NFL, and PGA to name a few.

I will watch an end game to whatever big sports thingy is happening.  Stanley Cup final game, Olympic Gold Medal, World Cup soccer final, WWE Wrestlemania, even Super Bowl.  I don’t have a team to cheer for.  I don’t follow the stats of players.  But the energy in a pub, home, or even live at the game is something to marvel at.  It sucks you in and you just want to cheer for a good play or ooooo at a hard hit.

I’m not going to diss fans of sports.  I feel that way about Star Wars.  I know tons about that universe.

Rancors FTW in my Fantasy League Football match up.

I don’t normally do this, but here’s my throwback Thursday story.  More like a brief recap of my teen years.

I entered Grade 8 and was quickly bullied.  It sucked.  But in my mind, I was there for an education.  I wasn’t popular.  I was a geek/nerd/dork type of person.  My lunch hour was spent in the Chess Club.  Before and after school was spent in the Math Club.  The bullies were usually easy to ignore since I only saw them in the halls walking from class to class.  During classes, I wasn’t always that lucky.  I kept my grades up all through Grade 8 & 9.  It was the only thing that kept me wanting to attend school.  The few friends I made were nice enough that I am still in contact with them via Facebook and the occasional text.

I still have my first chess board after all these years.

Then during the summer between Grade 9 & 10 my family moved about thirty minutes away from that address.   I stayed in touch with only a couple of friends that summer.  Where we moved, new homes were being built, a new Highschool had just been built.  It had all new students, new teachers, new computers, new everything.  A new start.

Grade 10 was when I began to change my attitude towards school.  I wasn’t going to be bullied any more.  The first time I was teased, I dealt it right back tenfold.  I was razor sharp and was quickly respected and not teased all that often.  I never became the bully (at least I don’t think I did).  Instead I befriended everyone I could.  By the end of Grade 10 I had tons of friends, but my grades began to slip.  I just wanted to be liked and it was working.  And girls began to talk to me more.  I even got myself a girlfriend!  I also missed plenty of opportunities to date, but that’s a different story.  On the inside I was growing up, but to look at me, not much was changing. 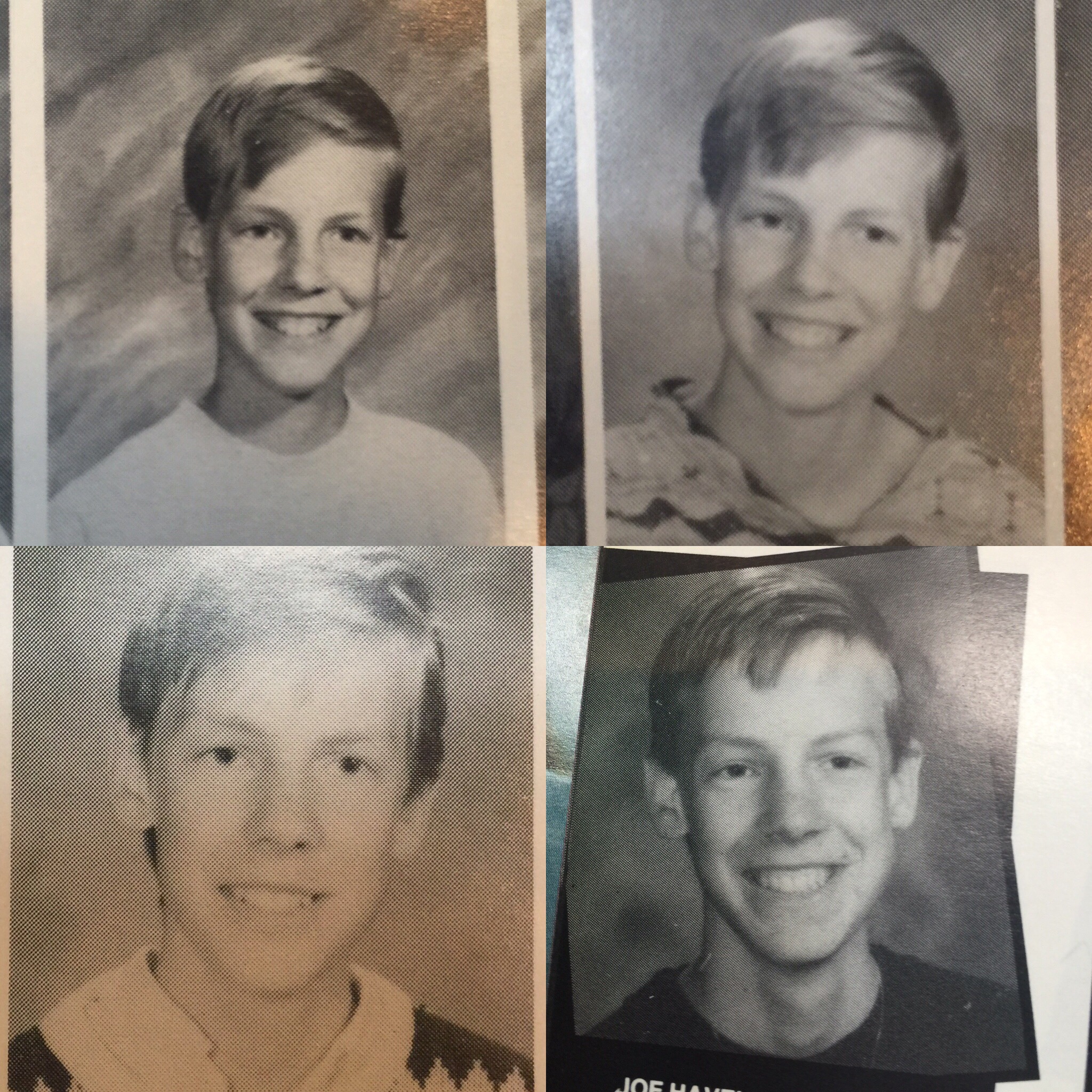 Grades 11 & 12 were kind of a blur.  School was going by quickly, boys and girls were turning into miniature adults, and my grades were getting worse.  I still loved having friends throughout these times, but it soon became obvious that not many were going to be lifelong friends.  I ended my Grade 12 year by doing something that I haven’t ever regretted.  I didn’t attend the Graduation Ceremony or the After Grad.  I knew who I was and wasn’t sure if I’d ever see any of these people again.  I entered the summer of 1994 ready to party.  And I did… for about six years.  The formal education I got during those times was minimal, but I read and studied topics that interested me.  I lived my life and with no regrets.

I’m still a geek.  I still have friends from all my years of being alive.  The biggest thing that has changed about me is that I’m proud of who I am.  My geekiness is a tad more extravagant, I’ve earned a few wrinkles and my hair is starting to recede.  On the inside, I’m still that nerd with a razor sharp wit who loves to learn new skills.