To me, Christmas is about having fun. Since I was a child, I always remember getting toys, puzzles and video games as gifts. On Christmas Day, and the days following, would be spent having fun. Living the dream of playtime!

My fondest memories of my father was at Christmas. That was when he would crouch down to my level and play with my toys and me on the floor. This was always the most father/son interactions we would have all year long. Those fleeting experiences meant the world to me.

When I became a father, I spent as much time with my kids as I could- not just on Christmas. We continue to have Family Movie Nights and video game time. Christmas is a little more special and we put in a few more hours of goofing off. This year, we played some UNO, finished a puzzle and got back to basics with some smack talk during Mario Party!

We accomplished these fun times because the teenagers are very helpful as they have grown older. Having teenagers help out with the chores and Preparing Meals means that we can all spend more time as a family relaxing and playing. Even though I miss when they were little, I can still look back on those memories with joy and happiness.

Christmas is the one time of the year that we would take a lot of pictures. This year we lacked any real family photos. Perhaps it was a bit the fact that our teens don’t like their pictures taken, and maybe also- we were trying to live in the moment a bit more. This winter break didn’t feel like Christmas at first and held a bit of depression in all of our hearts. But the tender and fun moments we had as a family helped bring the joy back and made for a good Christmas Day.

How did your Christmas feel this year?

I wrote about Jigsaw Puzzles back in April of 2018. It only seems fitting that I’d mention them again. It seems that our son has decided to dust off some of the boxes of puzzles to keep himself occupied during isolation.

He seemed to be pretty excited about the idea of doing a jigsaw puzzle and posted on his Instagram yesterday about it. He doesn’t post as much on there like his older sisters, so it surprised me to see the post. Usually he posts about speed skating, but I guess since that done for the foreseeable future, it makes sense that he wants to share something.

He hasn’t done nearly as much as I expected, considering I’d probably be close to finished in one sitting. It drives me bonkers to leave a puzzle unfinished. Seeing this laid out on our table made me want to partake in assembling it. But I held back on the urge. It is his puzzle to work on. At least until he asks for help. Then, I may lose sleep trying to get it completed.

Because of the self isolation and being forced to stay home (or nearby) without contact with pretty much everyone, I can see why puzzles have become popular in my Social Media feeds. I find it astonishing that our son also took to jigsaw puzzles as a way to cope and keep occupied. It’s almost like being a part of a “hive collective” ideal. Most of us all fall into the same line of thinking at similar times, even when nothing seems to provoke or promote those thoughts.

But I digress. Puzzles are a great way to keep your mind active. Our son also pulled out an old “word search” book that we had in a cupboard for ages. Pretty sure these are easy puzzles. But they are keeping him away from video games at the moment, which is a nice change of pace.

How are you doing in isolation? Did you begin doing puzzles? If so, what type? Let me know in the comments.

And stay healthy and safe during these crazy times.

Today I pulled out an old box of comics from our barn. Don’t get angry! The comics were tucked away in an old cupboard and stayed dry. But they weren’t in great shape to begin with. I never really took care when handling them.

Anyhow, this story isn’t about my old Transformers and Akira comics. My son found a few other gems from my youth that he questioned and made me happy.

An old bowling plaque. Looking back at that score- awful. We bowled every Wednesday after school. Nope, we weren’t cool- that’s for sure. But I always remember just having fun with my friends on our team. Maybe if I focused I’d have gotten better. But really, what would that do for me growing into an adult? Having fun was a much better option. 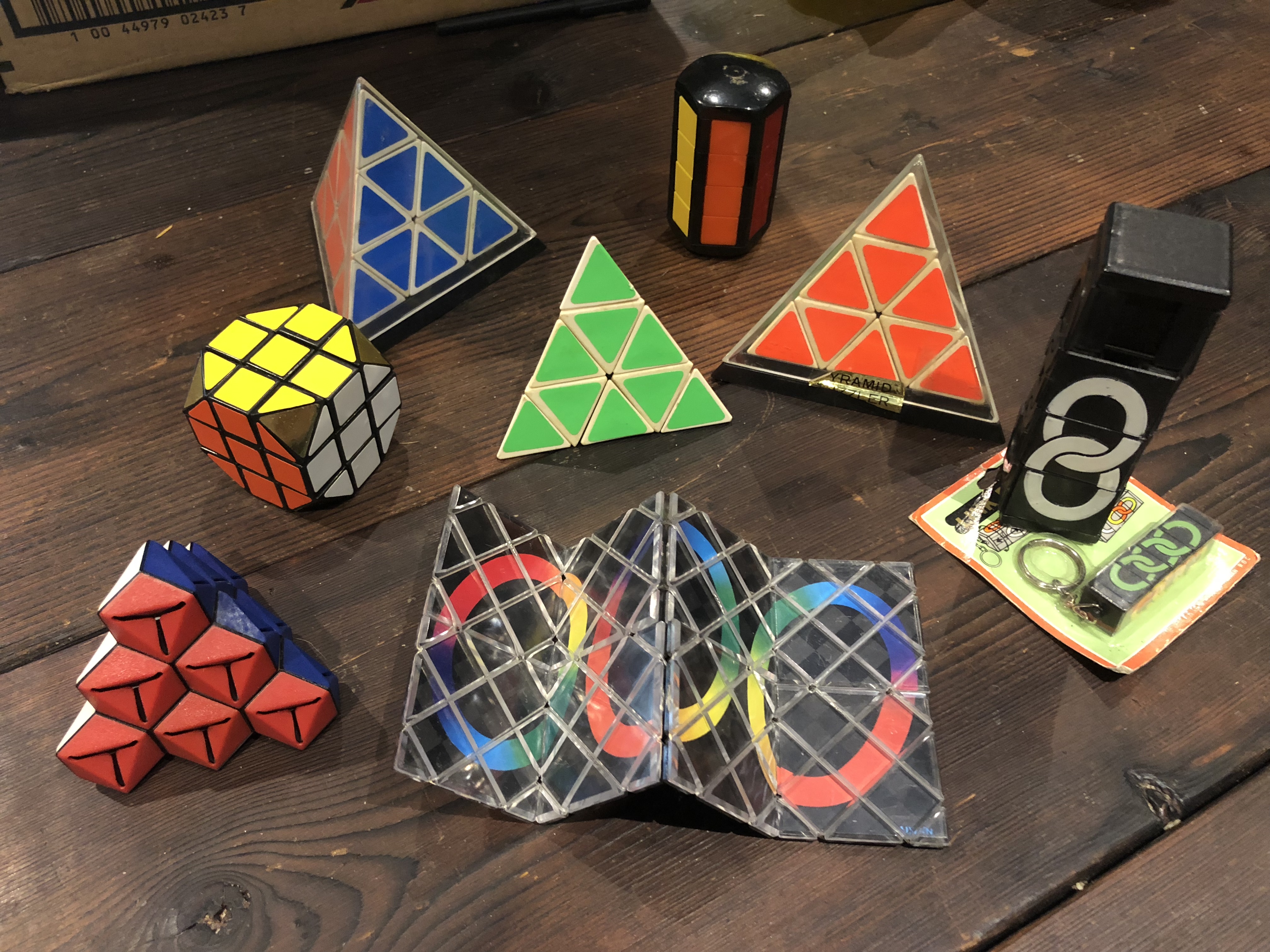 My son also discovered a couple of my old wooden yo-yos and a collection of puzzles. Plastic twisting puzzles. These were my version of a fidget spinner back in the early 90’s in high school. I mastered each of them and began to get faster solving them. The only one I struggled to get faster at was the original Rubik’s cube. I can generally solve it in under five minutes. Only because I learned a routine and frequently just go through the motions. I know there are ways of solving two parts at once- I never got that good.

Trying to teach my son the patterns on these puzzles has proven difficult. He wants to solve them, but is still trying to grasp the ideas. Hopefully solving puzzles can be a new passion of his.

I always challenge my mind and brain power.  Crosswords are something that I enjoy doing even though I’ve rarely done any on my own.  My wife and I have being doing crossword puzzles since we met.  The one thing I’ve noticed with newspaper puzzles over the years?  They repeat answers.  Which is good, since I know 100% that Aida is the Giuseppe Verdi opera.  A fact I knew before these puzzles because I saw the opera when it came to Vancouver back in 1989. Sing for me angel of music.

It’s the only true opera that I have ever seen.  Foreign language, outrageous sets, over the top performances, live elephants, and a fat lady singing.  It was an experience to remember, and one that changed my life. I fell in love with classical music and stage performances.  I received an Aida advertising banner from a friend of my mother’s and it hung on my bedroom door for years.  A couple of years later, in 1991, I saw “The Phantom Of The Opera.” Musicals now ruled my life.

Over the years I have enjoyed watching musical theater.  I’ve seen every Andrew Llyod Webber show that has come to town.  I have almost all of them on CD (you know, those things that are physical copies containing music).  But my favorite musical has to be Les Misérables.  I’ve seen it performed twice at The Queen Elizabeth Theater in Vancouver.  I also enjoy watching the PBS concert DVD with friends and sing along.  Especially to “Master of the House” that one is my favorite song.

“This only goes to show, what little people can do!”

When South Park: Bigger Longer  & Uncut came out in 1999, Matt Stone claimed in an interview that the film was inspired by Les Miz.  I believe it.  Even in it’s vulgarity, the South Park film contains some of the most catchiest tunes ever.  Songs that are still fun to sing when drunk.

As I get older and my tastes change, I still have a soft spot for the familiarity of a good musical.  Even Disney films that I re-watched with my children as they grew up bring me joy.  Having an eclectic taste has allowed me to appreciate a good satire or a classical piece without judgement.

Now back to my crossword and finding a five letter word to complete this phrase, “Oh my god! They killed _____!”